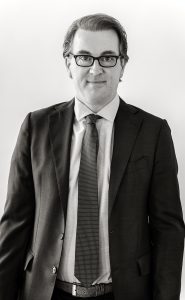 Nicholas Damman graduated in law from the Katholieke Universiteit Leuven (K.U.Leuven). He also holds a degree in International and European law from the Université Catholique de Louvain-la-Neuve.

He was admitted to the Bar of Antwerp in 1999. He was first working at Hens & Buelens during two years and then at LVPLaw, previously Lafili, Van Crombrugghe & Partners, during sixteen years. Nicholas joined our law firm in 2017.

His major areas of practice are construction law, commercial law, bankruptcy and reorganisations in the field of litigation, consulting and drafting contracts.

He was Vice-President of the Insolvency Law Commission of the International Association of Young Lawyers (A.I.J.A) in the framework of which he gave lecturers at several times.